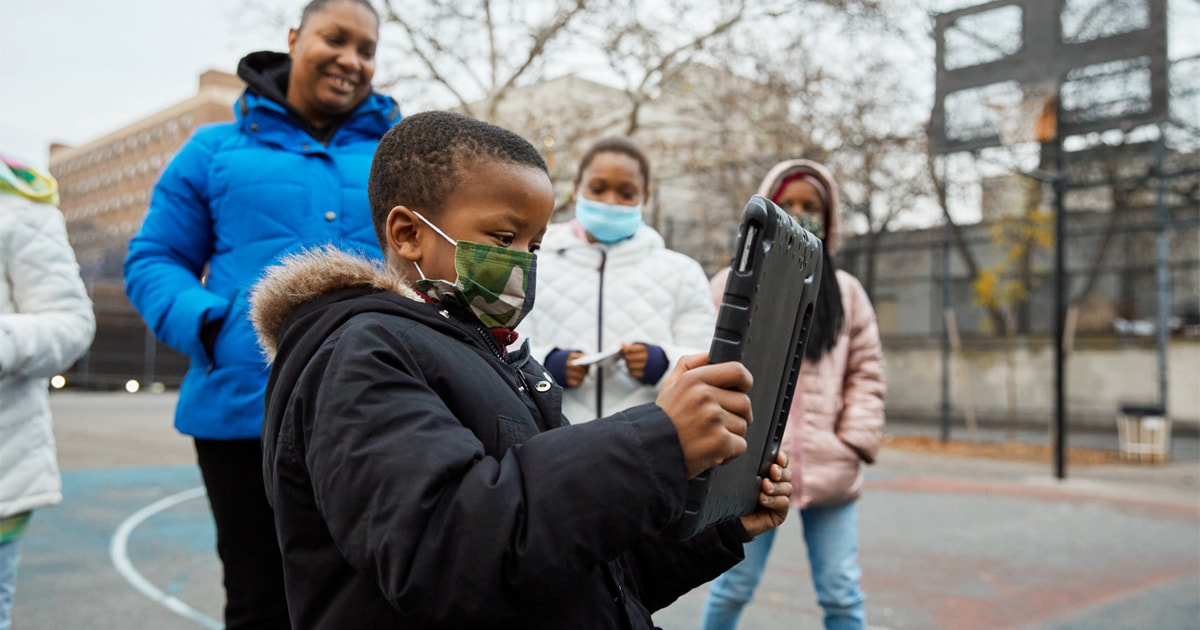 For a few hours every week, Apple corporate team member Mandy Hazen logs onto the Crisis Text Line platform from her home in Fremont, California, and starts to chat with people across the country who are dealing with difficult personal situations.

When the COVID-19 pandemic began, the longtime Apple volunteer started looking for ways to keep helping others remotely and discovered the organization, which anonymously connects those in crisis to a volunteer who has been trained by professionals to listen and offer support. Since joining in March 2020, Hazen has logged more than 400 hours of texting as part of Apple’s Employee Giving program; Apple matches every hour an employee volunteers, or dollar they donate, with a monetary donation to the same organization.

“It makes me so happy that Apple helps to magnify the time I put into this,” says Hazen. “The money goes to such an amazing organization that is meeting people where they are during a really difficult time.”

Over the course of her volunteering, she’s helped to counsel hundreds of people who are dealing with situations like depression, domestic abuse, and isolation, and — when needed — connect them with professional help and resources.

“It has made me realize that sometimes people need someone to lean on to help them through a tough time,” says Hazen, “but they know that we’re there to talk to them and that’s their strength that gets them through to the next day.”

Across the United States and around the world, Apple and its employees are finding new ways to give back to the communities they call home.

This year, Apple’s Employee Giving program celebrates its 10th anniversary, having raised nearly $725 million for 39,000 organizations worldwide — with over $120 million distributed to organizations around the globe in 2021 alone. The funds raised through Apple’s Employee Giving program include the work of 68,000 employees who have logged almost 2 million volunteer hours.

In addition to the contributions made through the Employee Giving program, Apple’s Community Investment team donates millions of dollars each year to nonprofits around the globe, including World Central Kitchen, The King Center, and China Foundation for Poverty Alleviation.

At St. Bartholomew’s Church in midtown Manhattan, a long line of men and women queue for food. This soup kitchen runs seven days a week, no matter the weather, and hasn’t missed a night in 36 years.

It’s part of the Grand Central Food Program, one of the many services provided by the Coalition for the Homeless, which supports the needs of New York City’s most vulnerable. Apple is helping to fund the Coalition’s work through SLC grants.

Juan De La Cruz is the director of the Grand Central Food Program and has seen the number of people served at St. Bart’s go from about 150 per night before COVID-19, to as high as 425 per night during the pandemic.

“A lot of support programs closed down and so we’ve seen people coming from as far away as Staten Island because this is the one place that they know — rain or shine — there’s going to be a meal for them,” says De La Cruz. “We’ve been able to continue providing these meals because of support from so many organizations, including Apple and its employees, and that means the world to us.”

Tom Sheppard has been an Apple Store team member in New York City since 2009. His three youngest children all attended Public School 41 (P.S. 41) in the Bronx, and Sheppard began volunteering to help give them the same opportunities that students at other schools enjoyed. During a period of three years, he volunteered an astounding 1,000 hours. In the first year alone, that amounted to a $10,000 donation from Apple matching his time through the Giving program.

“Find the thing you’re passionate about, figure out how you can share that with other people, and then see how Apple can help you amplify sharing it,” says Sheppard, who also started programs that included an iPad photo club and a course to help parents get their high school diploma. “Sharing my love of technology was so important because it was exposing these kids to something they didn’t have access to before — and maybe that opens up a future of more opportunity.”

LaToya Reed’s children also attend P.S. 41 and she met Sheppard through his volunteer efforts. She was so inspired by his work that she decided to start volunteering as well.

“Mr. Sheppard has made the kids feel comfortable to step out of their comfort zone, and get excited about technology,” says Reed. “He pushes me to be a better me when it comes to the kids. He pushes me to always go the extra mile because the kids deserve it — and so I want to continue the work he did and make sure it keeps going.”

In Austin, Texas, SLC grants support the work of the African American Youth Harvest Foundation (AAYHF), which provides community-based resources for African American and low-income youth and families. That includes mentoring and counseling programs for at-risk youth, and a variety of other initiatives that take a holistic approach to care.

“We want to find out what’s going on at home, what’s going on in school,” says Michael Lofton, AAYHF’s CEO. “Are your lights on? Do you have food? Do you have clothes? Does anybody need mental health or substance abuse counseling? Because if we’re going to be successful, we’ve got to make sure the environment that surrounds someone is okay as well.”

This year, Apple’s funding went to AAYHF’s COVID-19 response, including a program to help raise vaccination rates by recruiting high school students to go door to door in their communities.

“Thanks to Apple, we are putting boots on the ground,” says Lofton. “We’re paying young people $17 an hour to go to apartment complexes and help others go and get vaccinated. These are predominantly African American communities and these kids are making a real difference — sometimes if you live in an environment where there is stress, where there is always a need, it makes a difference when you can give back and help somebody.”

Cork, Ireland, is home to the organization Nasc, which is the Irish word for link. Nasc works to support migrants and refugees in Ireland, and offers a number of different resources including the Gateway program for women, which is supported by Apple’s SLC grants.

“Our aim is to meet women where they are and promote self-confidence, self-esteem, and inclusion,” says Claire Mackey, Gateway’s project coordinator. “Apple has helped to keep the project running, and has given us the flexibility to be creative with how we support women. It’s given us the reassurance that we can maintain the work, and that means so much to us and to the people we’re helping.”

There are currently 40 women from 14 different countries in the program, and they are often matched with volunteers to help with learning English, and to foster a sense of connection. Saba, from Jordan, was paired with Apple employee and volunteer Barbara Ito, who is originally from Japan but is now based in Singapore. The women spoke once a week for months.

“I talked to her about everything,” says Saba. “She asked me every call: ‘How are you feeling today?’ Because of COVID, sometimes I’ve been sad and she’s helped to make me hopeful and happy.”

“We could find common things to talk about, even though we come from different backgrounds,” says Ito. “This opportunity meant a lot to me — I think it’s important that people around the world learn from each other and take care of each other.”