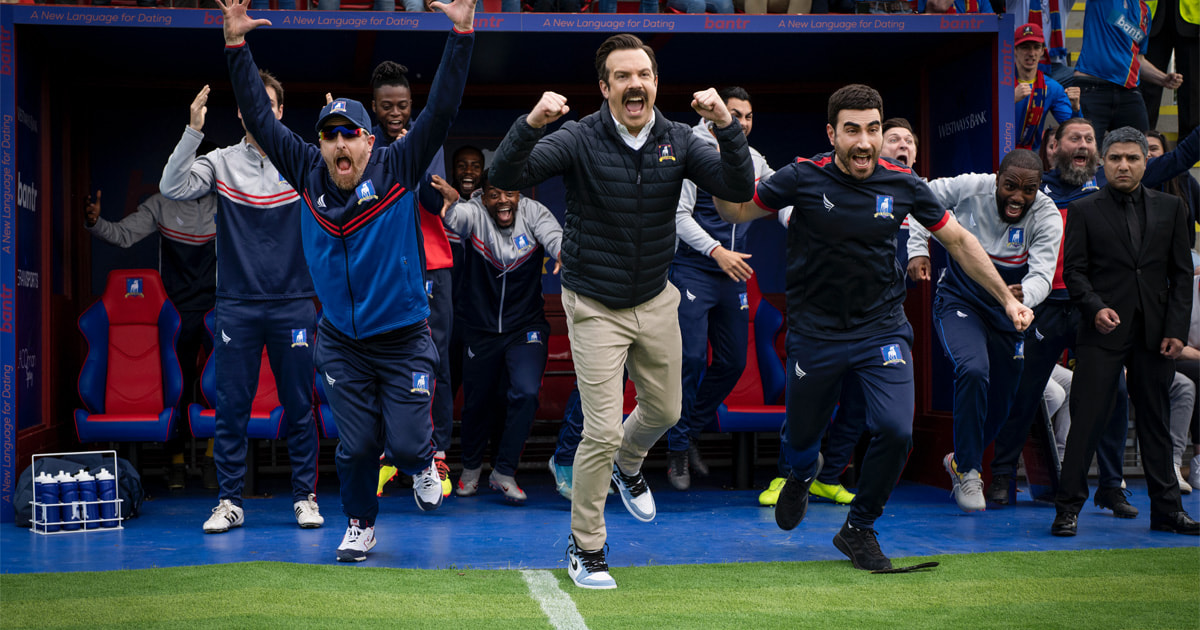 CULVER CITY, CALIFORNIA For the second consecutive year, Apple TV+ today broke records with 52 Emmy Award nominations across 13 titles, including Outstanding Drama Series, Outstanding Comedy Series, Outstanding Hosted Nonfiction Series or Special, Lead Actress in a Drama Series, Lead Actor in a Drama Series, and Lead Actor in a Comedy Series. Apple TV+ boosted its total number of Emmy Award nominations by more than 40 percent year over year in under three years since its global launch. The winners of the 74th Emmy Awards will be unveiled at a televised ceremony on September 12, 2022.

The second season of global phenomenon “Ted Lasso” was the most nominated comedy series for the second year in a row with 20 nominations total, and the widely celebrated freshman drama “Severance” made its Emmy debut with 14 nominations, scoring the first Outstanding Drama Series nomination for Apple TV+.

In addition, Apple Originals “Ted Lasso,” “Severance,” “Schmigadoon!,” “The Morning Show,” “The Problem with Jon Stewart,” “Foundation,” “Pachinko,” “See,” “Lisey’s Story,” “Central Park,” “They Call Me Magic,” and “Carpool Karaoke: The Series” were recognized with nominations for the 2022 Emmy Awards.

“This extraordinarily talented group of Emmy nominees showcase the variety of brilliant, unique, and original stories we’ve been honored to bring to the screen over the past year,” said Zack Van Amburg, Apple’s head of Worldwide Video. “Each of these series has inspired audiences to view the world a little differently, drawing attention to the human condition in moving, inspiring, and often very funny new ways. We’re grateful to the Television Academy and applaud the creative teams and casts for their wonderful achievements today.”

“We are immensely proud of the broad selection of Apple Original programming recognized by the Television Academy today,” said Jamie Erlicht, Apple’s head of Worldwide Video. “These series have captivated audiences and we greatly admire all of these incredibly talented storytellers and congratulate them on their nominations for the dynamic stories they bring to life.”

Last year, in its second year of Emmy eligibility, Apple’s “Ted Lasso” broke records by becoming the most nominated freshman comedy series in Emmy history. Apple Original series, films, and documentaries have now been honored with 246 wins and 1,115 award nominations and counting, including this year’s Oscars Best Picture winner, “CODA.”

“The Problem with Jon Stewart” (2)

Each episode of “Carpool Karaoke: The Series” features celebrities sharing a car, singing along to their personal playlists, and embarking on adventures. Season five kicks off with Simu Liu and Jessica Henwick; “The White Lotus” costars Murray Bartlett, Alexandra Daddario, and Sydney Sweeney; Anitta and Saweetie; Zooey Deschanel and Jonathan Scott, who first met on “Carpool Karaoke”; the stars of All Elite Wrestling; and the D’Amelio family.

“Carpool Karaoke: The Series,” which has won an Emmy for each of its previous four seasons, along with multiple Producers Guild Awards and a Critics Choice Award, is produced for Apple by CBS Studios and Fulwell 73 Productions, with executive producers James Corden, Eric Pankowski, and Ben Winston.

“Central Park” is an animated musical comedy about the Tillermans, a family that lives in Central Park. Owen, the park manager, and Paige, his journalist wife, raise their kids Molly and Cole in the world’s most famous park, while fending off hotel heiress Bitsy Brandenham and her long-suffering assistant Helen, who would love nothing more than to turn the park into condos. “Central Park” stars a renowned voice cast that includes Josh Gad, Leslie Odom Jr., Daveed Diggs, Emmy Raver-Lampman, Kathryn Hahn, Tituss Burgess, and Stanley Tucci.

Based on Isaac Asimov’s award-winning stories, and featuring an international cast led by Jared Harris and Lee Pace alongside rising stars Lou Llobell and Leah Harvey, the monumental adaptation of “Foundation” chronicles the stories of four crucial individuals transcending space and time as they overcome deadly crises, shifting loyalties, and complicated relationships that will ultimately determine the fate of humanity. The Apple Original drama also stars Laura Birn, Terrence Mann, and Cassian Bilton.

“Foundation” is led by showrunner and executive producer David S. Goyer and produced for Apple by Skydance Television with Robyn Asimov, Josh Friedman, Cameron Welsh, David Ellison, Dana Goldberg, and Bill Bost also serving as executive producers on season one of the series.

Based on the best-selling novel by Stephen King, and adapted by the author himself, “Lisey’s Story” is a deeply personal thriller that follows Lisey Landon (Academy Award winner Julianne Moore) two years after the death of her husband, famous novelist Scott Landon (Academy Award nominee Clive Owen). A series of unsettling events causes Lisey to face memories of her marriage to Scott that she has deliberately blocked out of her mind. Joan Allen, Jennifer Jason Leigh, and Dane DeHaan star alongside Moore and Owen.

Picking up after the explosive events of season one, season two found “The Morning Show” team emerging from the wreckage of Alex (Jennifer Aniston) and Bradley’s (Reese Witherspoon) actions, to a new UBA and a world in flux, where identity is everything and the chasm between who we present as and who we really are comes into play. Along with Aniston and Witherspoon, the star-studded cast includes Billy Crudup, Mark Duplass, Nestor Carbonell, Karen Pittman, Bel Powley, Desean K. Terry, Janina Gavankar, Tom Irwin, and Marcia Gay Harden, as well as new additions for season two Greta Lee, Ruairi O’Connor, Hasan Minhaj, Holland Taylor, Tara Karsian as news producer Gayle Burns, Valeria Golino, and Julianna Margulies.

“Pachinko” chronicles the hopes and dreams of a Korean immigrant family across four generations as they leave their homeland in an indomitable quest to survive and thrive. Starting in South Korea in the early 1900s, the story is told through the eyes of a remarkable matriarch, Sunja, who triumphs against all odds.

“The Problem with Jon Stewart”

Acclaimed host, writer, producer, director, and advocate Jon Stewart, recipient of this year’s Mark Twain Prize for American Humor, leads with compassion and humor as he takes a deep dive into some of the most enduring, deeply entrenched issues of our time in the Apple Original series. “The Problem with Jon Stewart” explores complex topics, such as veteran care and burn pits, preserving individual freedom, how to achieve racial equality, climate change, the American economy, the stock market, mainstream media versus sensationalism, and America’s gun crisis, through the differing perspectives of stakeholders, experts, and individuals confronting these challenges.

“The Problem with Jon Stewart” is hosted and executive produced by Stewart through his Busboy Productions. The series is executive produced by showrunner Brinda Adhikari, alongside Stewart’s longtime manager James Dixon, Chris McShane, and Richard Plepler through his EDEN Productions, which has an exclusive overall production deal with Apple. Lorrie Baranek is supervising producer, and Kris Acimovic is head writer.

A parody of iconic musicals, “Schmigadoon!” is a new musical comedy series starring Emmy Award nominee Cecily Strong and Emmy Award winner Keegan-Michael Key as a couple on a backpacking trip designed to reinvigorate their relationship when they discover a magical town in which everyone is living in a studio musical from the 1940s. They then discover that they can’t leave until they find “true love.”

The series hails from Broadway Video and Universal Television, a division of Universal Studio Group. “Schmigadoon!” is co-created by Cinco Paul and Ken Daurio. Paul serves as showrunner and wrote all of the original songs for the series. Lorne Michaels and Andrew Singer serve as executive producers, Micah Frank serves as co-executive producer, and star Cecily Strong and Caroline Maroney serve as producers.

“See” is set in a brutal and primitive future, hundreds of years after humankind has lost the ability to see. In season three, almost a year has passed since Baba Voss (Jason Momoa) defeated his nemesis brother Edo and bid farewell to his family to live remotely in the forest. But when a Trivantian scientist develops a new and devastating form of sighted weaponry that threatens the future of humanity, Baba returns to Paya in order to protect his tribe once more.

In “Severance,” Mark Scout (Adam Scott) leads a team at Lumon Industries, whose employees have undergone a severance procedure, which surgically divides their memories between their work and personal lives. This daring experiment in “work-life balance” is called into question as Mark finds himself at the center of an unraveling mystery that will force him to confront the true nature of his work… and of himself.

Jason Sudeikis is Ted Lasso, an American football coach hired to manage a British soccer team — despite having no experience. But what he lacks in knowledge, he makes up for with optimism, underdog determination — and biscuits. The widely acclaimed series also stars Hannah Waddingham, Brendan Hunt, Jeremy Swift, Juno Temple, Brett Goldstein, Phil Dunster, and Nick Mohammed.

In addition to starring, Sudeikis serves as executive producer, alongside Bill Lawrence via his Doozer Productions, in association with Warner Bros. and Universal Television, a division of Universal Studio Group. Doozer’s Jeff Ingold also serves as an executive producer, with Liza Katzer as co-executive producer. The series was developed by Sudeikis, Lawrence, Brendan Hunt, and Joe Kelly, and is based on the preexisting format and characters from NBC Sports.

“They Call Me Magic”

“They Call Me Magic” offers a rare glimpse into the incredible real-life story of Earvin “Magic” Johnson, who left his mark on history through his work — both on and off the court — and continues to impact our culture today. With unprecedented access, the docuseries explores Magic’s remarkable journey from being the face of the Los Angeles Lakers and cementing himself as an all-time NBA legend, to changing the conversation around HIV, and transforming into a successful entrepreneur and community activist. From Magic’s humble beginnings in Lansing, Michigan, to becoming the global force he is today, “They Call Me Magic” charts the cinematic life of one of the biggest cultural icons. The highly anticipated documentary event series explores the remarkable accomplishments and global impact of Johnson’s life, both on and off the court.

Directed by Rick Famuyiwa (“Dope”) and cinematographer Rachel Morrison (“Black Panther”), the docuseries is produced for Apple by XTR and New Slate Ventures, and produced in association with h.wood Media and Delirio Films.

All programs are currently streaming on Apple TV+.

About Apple TV+
Apple TV+ is available on the Apple TV app in over 100 countries and regions, on over 1 billion screens, including iPhone, iPad, Apple TV, Mac, popular smart TVs from Samsung, LG, Sony, VIZIO, TCL, and others, Roku and Amazon Fire TV devices, Chromecast with Google TV, PlayStation and Xbox gaming consoles, and at tv.apple.com, for $4.99 per month with a seven-day free trial.

Apple revolutionized personal technology with the introduction of the Macintosh in 1984. Today, Apple leads the world in innovation with iPhone, iPad, Mac, Apple Watch, and Apple TV. Apple’s five software platforms — iOS, iPadOS, macOS, watchOS, and tvOS — provide seamless experiences across all Apple devices and empower people with breakthrough services including the App Store, Apple Music, Apple Pay, and iCloud. Apple’s more than 100,000 employees are dedicated to making the best products on earth, and to leaving the world better than we found it.