What is backward compatibility and why is it so important?

Backward compatibility is a process that supports older legacy games on newer generation systems. Basically, for PlayStation and Xbox, you could pop in a disc designed for an older console into your new system and it’ll just work. We’ve seen this work between the Xbox 360 and Xbox One due to Xbox’s emulation process, but it would be something new for PlayStation.

Almost everybody has favorite games that they go back to time and again. Some stories you just want to play multiple times. With backward compatibility, you can continue playing your favorite games without needing to pay for a remastered copy (if one is even offered). Of course, you can always pick up a remaster to support your favorite developers and enjoy the updated graphics but it should be your choice.

PS5 will have backward compatible for select titles

According to Sony, only about 100 of the most-played games on PS4 will be backward compatible at launch on the PS5. The company will work to support more in the future.

Lastly, we’re excited to confirm that the backward compatibility features are working well. We recently took a look at the top 100 PS4 titles as ranked by playtime, and we’re expecting almost all of them to be playable at launch on PS5. With more than 4000 games published on PS4, we will continue the testing process and expand backward compatibility coverage over time.

Why would the PS5 offer backward compatibility when the PS4 didn’t?

The lead console architect for the PS5, Mark Cerny, said it will be compatible because the next-generation console is based, in part, on the PS4’s architecture. This means the games you love for the PS4 should still be playable when the PS5 comes out at the end of this year.

Save those discs and don’t shy away from building out your games library in 2020; PlayStation should be stepping into this next generation on the right foot this time.

Get yours it before it sells out

A few retailers are letting fans sign up for notifications for the PS5 launch this winter. Get an alert when pre-orders are available so you can get yours before they sell out. Once the PS5 is released, expect to see some of the very best console exclusives like Spider-Man: Miles Morales and Horizon Forbidden West.

The exclusive of the decade 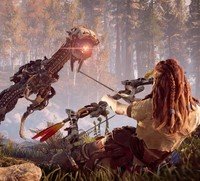 Our favorite lead character, too

We came for the robot dinosaurs but stayed for one of the most unique and relatable stories told in a game this generation. Horizon Zero Dawn is an experience that nobody should miss, and thanks to backward compatibility you should still be able to play it on PS5.