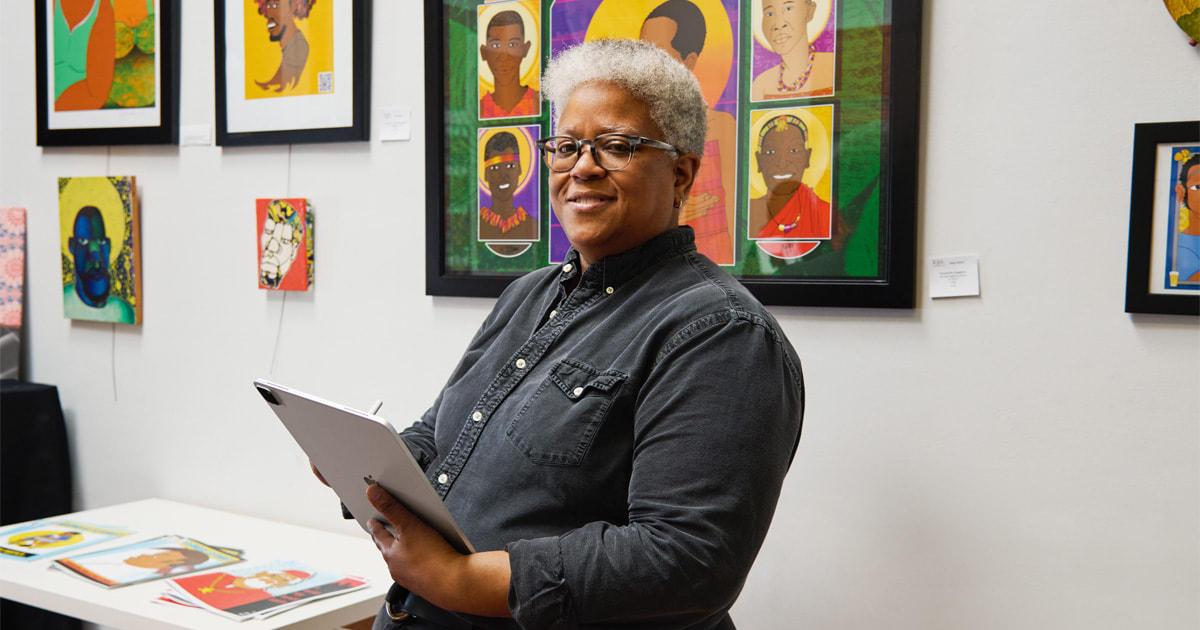 Chronicling the faces of Juneteenth with iPad Pro and Apple Pencil

Illustrator, comic creator, and scholar Ajuan Mance brings the past into the present through portraits of historical Black figures to celebrate Juneteenth

The Combahee River flows southeast through South Carolina, a 40-mile route that spills into the Saint Helena Sound. More than a century and a half ago on June 1, 1863, the Combahee turned the tide of emancipation when Harriet Tubman and her regiment of 150 Black Union troops led more than 700 escaped slaves to freedom aboard two gunboats. For Tubman, the river marked her heroism as the first woman to lead an armed US military operation in the Combahee Ferry Raid. For illustrator, comic creator, and scholar Ajuan Mance, it’s symbolic of the movement — geographically, between the North and the South, and politically, from the Emancipation Proclamation and Juneteenth, to the Civil Rights Act — Tubman and other activists have made throughout history.

“Their activism challenged prevailing systems and policies that limited when and how Black people could move through the world,” Mance says, comparing Tubman to civil rights activist Rosa Parks. “These limits on Black movement were not only the practical tools for oppression, but also the symbols of white control of Black bodies. Harriet Tubman used movement from the South to the North as a tool for freeing other Black people, and Rosa Parks rejected Black people’s conditional access to transportation. These women’s activism was really about restoring to Black people the right to move freely throughout their world.”

In celebration of Juneteenth, Mance is revisiting a series of digital drawings created on iPad Pro titled “The Ancestors’ Juneteenth,” in which she places historical Black figures in present-day settings to reflect on Black people’s journey from the 19th to the 21st century. In these illustrations, Mance draws ink on paper before she snaps an image in Adobe Scan on her iPad Pro. In Procreate, Adobe Photoshop, and Adobe Fresco, she colors her scanned image non-photo blue, simulating the process of creating comics, while using Apple Pencil to add layers of color — a workflow she previously completed using a light table and analog tools.

As an artist who often works on a larger scale, Mance appreciates the ability to zoom all the way in on a snippet of a giant canvas on iPad Pro. “iPad and Apple Pencil make it easy for me to draw, manipulate, and add color and effects at the micro level,” she says. “So the closer people look, the more they will see.”

As part of the Juneteenth series, Mance pictures Parks and Tubman at a picnic on the banks of the Combahee River. “They were pioneers for whom freedom of movement was so much a part of their impact that they hold this iconic role in our minds. All of the marching Rosa Parks did, getting arrested, walking up the courthouse steps, so that we have less obstacles today than we did during her lifetime; and Harriet Tubman, walking from the South to the North at least 13 times to escort other Black people to freedom — both of these women deserve a respite. I thought that all they might want to do today is sit by the river, take a load off of their feet, and just let the water do the moving,” Mance says.

Mance describes herself as a history detective. She will spend hours digging through archives, hunting for the unknown in the 19th-century Black experience, and poring over primary sources, religious texts, photos, and other historical documentation. Whether she’s preparing for a lecture at Mills College in Oakland, California, where she teaches African American literature, or beginning a new piece of art, she will always start with research to call to mind an image of the people and the time period she is exploring.

For “The Ancestors’ Juneteenth,” a work of speculative fiction, as she describes it, Mance contemplates which historical figures across different periods of time would be friends, and even what their dialogue would be. At Parks and Tubman’s picnic, intricately detailed down to the books they are reading, she emphasizes that whatever they are saying will have a touch of humor to it.

“My goal is to really humanize them,” Mance explains. “These are esteemed people who I respect, but I also think we need to understand them and experience them as people who walked the earth the same way that we do. That creates a sense of intimacy with our history that I find really empowering and inspiring.”

Part of humanizing these historical figures lies in their dialogue, but it’s also in their features. To bring those features into focus, Mance casts them in a light and mood uncommon to the way the world knows them. For Tubman, who was almost never seen smiling, Mance emphasizes a jovial grin. In all of her portraits, she starts with the nose, works her way down to lips, up to the eyes, and then finally the hair and the shapes it creates. “That African heritage that is almost written on the body and that signifies our history — all the ways that we wear our heritage are really compelling to me,” she says.

Mance first started using iPad Pro and Apple Pencil for her artwork while teaching a digital drawing class at Mills College. She remains impressed with how iPad has streamlined her workflow. “I can create a sketch and then ink over it all in the same app and all on the same device,” she says.

She also credits iPad for making the arts accessible to her students and equipping aspiring artists with skill sets that work across multiple devices, whether they’re working in Adobe Fresco or Procreate on iPad, or transferring a project to Mac.

“iPad has put the production of art into the hands of everyone,” Mance continues. “Voices and aesthetic visions are getting out there that would not have been able to reach a broad audience just 10 or 15 years ago.”

Though the Emancipation Proclamation was signed into law on January 1, 1863, it took more than two years for the legal right to freedom to be recognized for all Black people. On June 19, 1865 — celebrated as Juneteenth today — slavery officially came to an end in Texas as federal troops marched to Galveston.

“Juneteenth is the day when legally all of America saw Black people the way they’d always seen themselves: as human beings with the right to be free,” Mance says. “My hope is that pairing Black people together from throughout our history and setting them in the present will be a symbol of unity that demonstrates that no matter how spread across the nation we are, even with divided historical experiences of Civil War and freedom, we are one community.”