Step back in time with a virtual Mac running OS 8, complete with apps of the day, and favorite features like WindowShade and 3D folder icons.

Get it while you can. While we’re all looking forward to macOS Big Sur, developer Felix Rieseberg has instead looked back three decades to revive Mac OS 8. We’re also looking forward to Apple Silicon but he’s taking us to a time before Intel and even before PowerPC.

“Bear in mind that this is written entirely in JavaScript, so please adjust your expectations,” he writes on Github, where the emulator can currently be downloaded. “The virtual machine is emulating a 1991 Macintosh Quadra 900 with a Motorola CPU, which Apple used before switching to IBM’s PowerPC architecture in the late 1990s.”

The Mac OS 8 macintosh.js app itself is by Rieseberg, but it runs through the Basilisk II 68k Macintosh emulator. Reiseberg’s app can be downloaded complete, though, without a separate install of Basilisk II, and run from the regular Applications folder.

It is of absolutely no practical use whatsoever, but that doesn’t matter in the slightest. Launching it, you’re immediately back to the 1990s with Apple’s then-new, now-so-painfully-old design aesthetic.

That includes the much missed “Welcome to Mac OS,” and it includes System 8’s somewhat less missed marching row of extensions. At least none of these clash and mean you long for the days of Conflict Catcher.

The Mac emulator’s screen is stubbornly tiny on a modern Mac screen. And as you use it, you get a little disorientating conflict between your real Mac’s cursor and your new virtual Mac’s one. It can take some getting used to just where to click to open folders and applications, but you can do it — and there are apps to open. 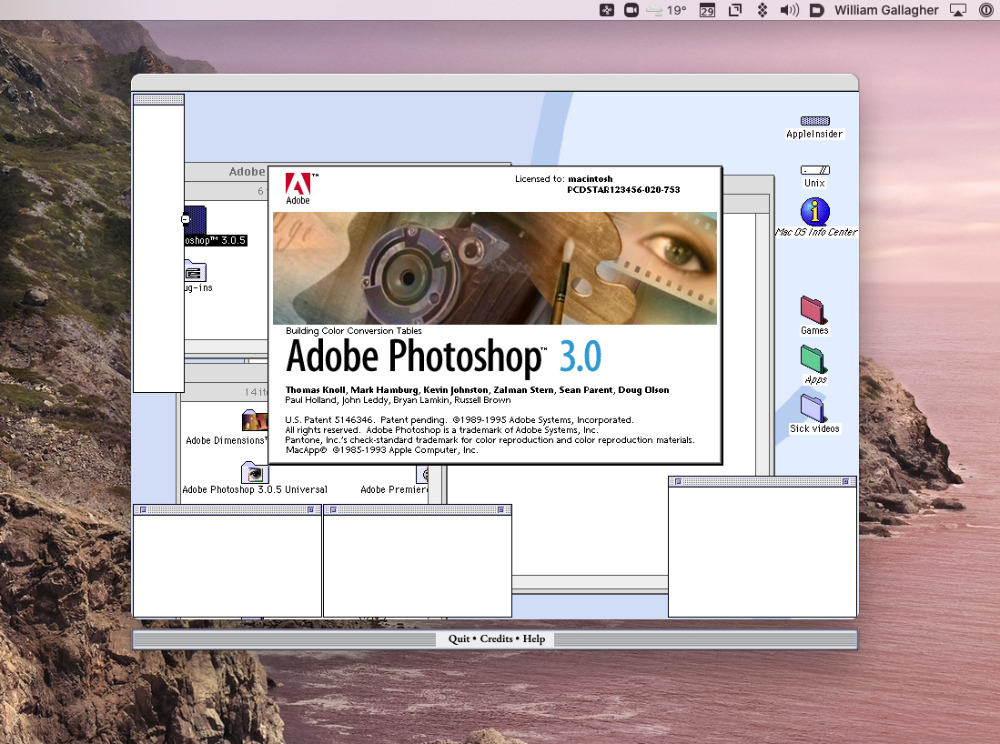 It really works, too.

Reportedly thanks to “an old MacWorld Demo CD from 1997,” the emulator includes Photoshop 3, Illustrator 5.5 and the forgotten old standby, Stuffit Expander. All of them work, within any limitations on their original demos, and you can use them with modern Mac files.

While AppleInsider couldn’t get this to work in testing, reportedly you can drop files into the emulator’s folder and they will appear in Mac OS 8 after restarting the app. Similarly, if you still have classic Mac disk images, those should be mountable here.

What you can’t do is see how the internet was back then, even though Netscape Navigator and Internet Explorer are included. “For what it’s worth, the web was quite different 30 years ago – and you wouldn’t be able to open even Google,” notes Rieseberg.

It’s not the oldest window back into Mac history, though. In 2017, an online emulator was released which presented the full System 7.0.1. Neither that nor the new Mac OS 8 one are supported or even condoned by Apple, though.

So you can no more be sure it will escape lawyers than you can do any serious work in it. But it’s a clear labor of love and such a joyous treat to run on today’s hardware.