At the time of writing, Genshin Impact is my new favorite mobile game (even unseating CoD Mobile) and deserves a spot in our Android Game of the Week highlight. So what makes this action RPG special?

There are a few different factors at play with Genshin Impact. Not only is it a pretty game, but it supports cross-save between the PC and mobile (both Android and iOS) versions. Sadly, that is not the case with the PS4. If you play on PC, you can pick up where you left off on your phone and vice versa. To my knowledge, this has never been the case.

The whole game has a bit of a Legend of Zelda: Breath of the Wild vibe to it. The open-world is just begging to be explored, and you’re generally free to do so. There are secrets to unlock, places to see, and puzzles to solve.

Save big on these VPN services ahead of Black Friday

Combat is a ton of fun, too. You will travel with a party, and you can switch between members of your party to line up a perfect combo and use other abilities. One of the early companions specializes in ranged combat and lighting enemies on fire, which help you line up another element to inflict tons of damage. It’s a really neat tag-team combat system. Add in some elemental complements to inflict maximum damage, and you got yourself a real treat.

Abilities are useful outside of combat, also. Your team is a diverse cast of characters, each with their own talents and weaknesses. The gameplay loop of finding secrets, solving puzzles, and battling your way out of a troublesome situation all folds back on itself such that the game remains entertaining for many hours.

Genshin Impact’s story isn’t revolutionary or anything, but it’s more than serviceable. You play as one of two twins exploring a new planet. They come face-to-face with a god who traps one of the twins and banishes the other to the world below. The twin you picked will have to go on a mission to save his/her sibling.

Genshin Impact is a good game, even with the monetization and nigh unbearable endgame grind.

This game is great, but it does come along with the usual free-to-play caveats. Not only is there a battle pass system, but also loot boxes. These loot boxes, called Fates, are how you get new characters and weapons for your party. It’s gacha mechanics, like Raid: Shadow Legends, and it’s kind of annoying. However, the game can be played without opening a loot box as you pick up new characters and weapons through normal play.

The endgame is where the game loses a bunch of its steam. It’s extremely grindy as you work to upgrade weapons and characters, and you go through your Resin (stamina system) very quickly and have to wait another day to continue grinding. You can, of course, fork over some real-world cash to refill it. This is such a disappointment because the game is genuinely fun and worth playing. It captured my full attention until I hit the endgame grind.

Genshin Impact is a good game, even with the monetization and nigh unbearable endgame grind. But now that we’re done here be sure to go check out the best Android games. And we have previous Games of the Week for you to read, too.

Game of the Week 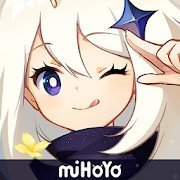 Taking a lot of JRPG cues

Genshin Impact is another gaming phenomenon, sporting a fun gameplay loop and a gorgeous open world to explore. There’s also cross-save between the PC version and the mobile variants.