Google thinks you have friends, which is cute, so they launched a program this week to reward you and your friends if you buy their new phones. A Google Store referral program of sorts has arrived in the inboxes of Google Store shoppers with codes that will get you up to $1,000 and your friends $100 each.

This Google Store Pixel 7 referral program is pretty simple, assuming you are invited. The email Google sends (see below) explains that if you “Give $100” you’ll “Get $100” for up to 10 friends who use a special code that is included. As long as they buy a Pixel 6a (review), Pixel 7 (review), or Pixel 7 Pro (review) with your code, you’ll both get $100 in credit to spend later on other stuff. While this isn’t an upfront discount on a phone, once you get your $100 credit, you could use the credit on whatever device you want, which could be another Pixel phone.

If you are the supplier of the code, 10 people can use the code, which means $1,000 in credit to your Google Store account. That seems like a lot of credit. For each friend, the limit is $100.

Google is also sending a version of this referral program to their Pixel Superfans group that has an added bonus. Those emails refer to a special “Superfans prize pack” that the referrer gets after the first referral. I don’t believe that Google has shared exactly what the prize pack is and has instead described it as “a little something extra.” EDIT: The prize pack is a hat, water bottle, and pin.

Again, the program invites are sent to your inbox from the Google Store. I don’t believe there is another way to check for access to it, you just have to get the email. In case you want to go search your inbox for it, search for “Get $100 to spend on the Google Store” or “Give $100. Get $100. Know someone who would love a Pixel too?”

To recap, if invited to this program, Google is providing you with a code that can be used by 10 friends of yours. By using the code to buy a Pixel 6a, Pixel 7, or Pixel 7 Pro, you and your friend each get $100 to spend on Google Store products. This isn’t a $100 discount at the time of initial phone purchase, but once you get the code, you can spend it on whatever.

If you were invited and want to share those codes with the community, feel free to drop them below. 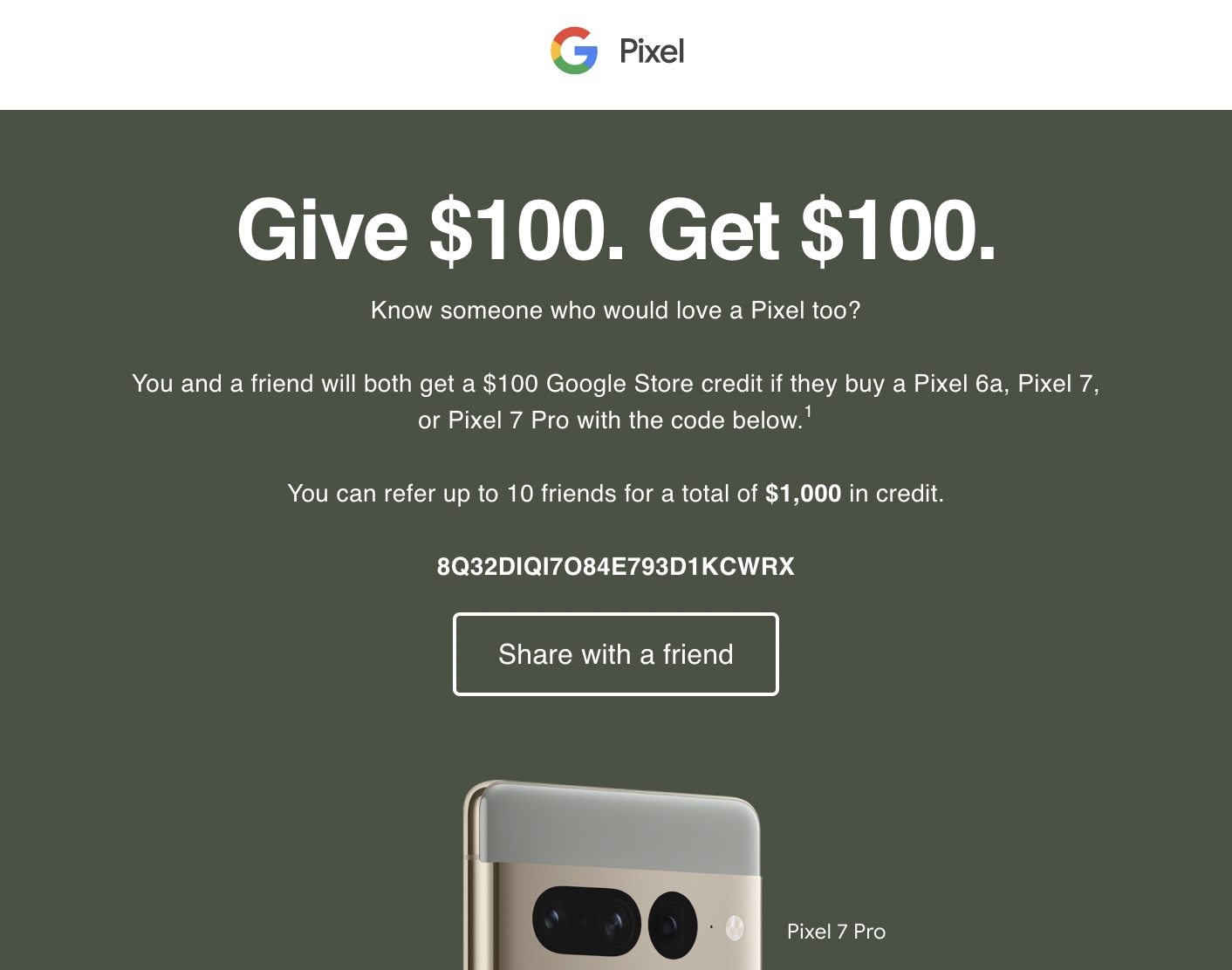