The new iPhone 14 Plus in purple 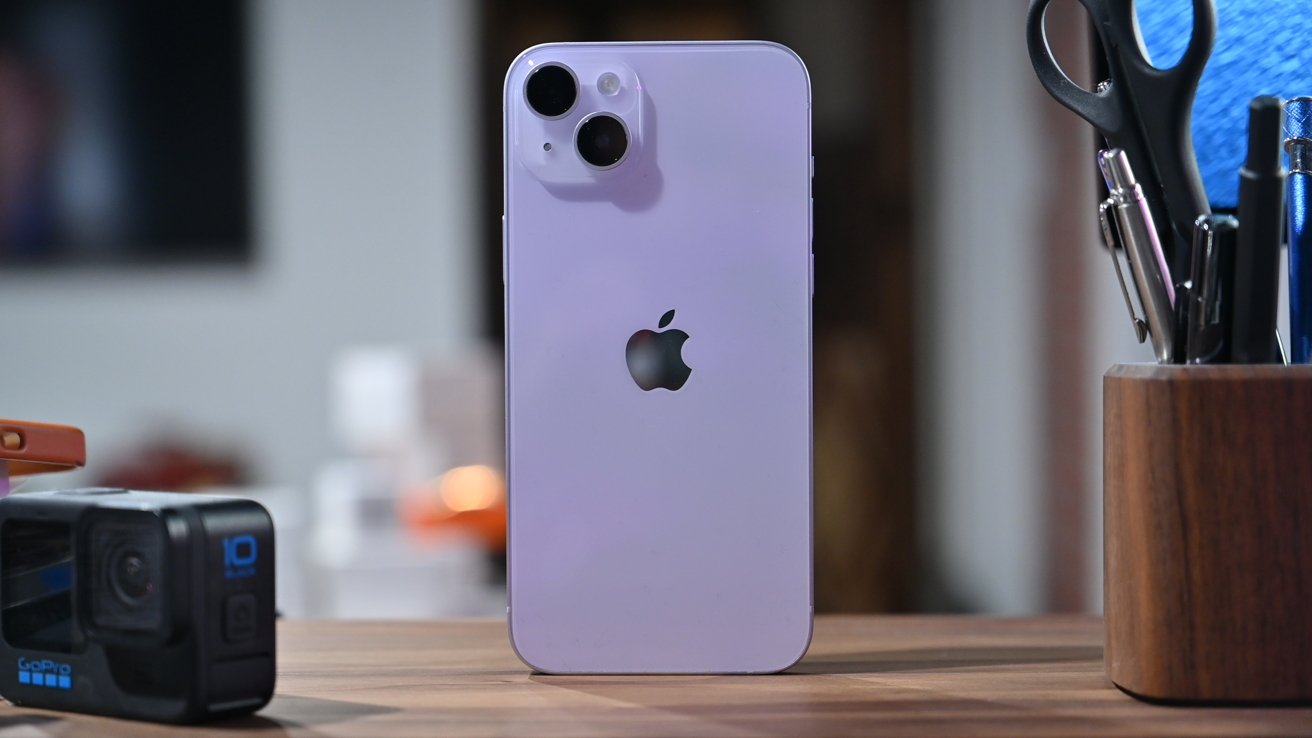 
Apple’s decision to put aside the iPhone mini line in favor of the larger screen on the iPhone 14 Plus is the best decision in an otherwise muted update cycle.

It’s clear that the iPhone 14 isn’t the biggest annual update for Apple’s flagship smartphone lineup. At least, that’s the case for the standard, non-plus, non-Pro model.

For fall 2022’s releases, Apple decided to kill off the mini variant in the face of low sales. However, instead of leaving the gap in what’s become the typical four-iPhone roster, Apple decided that bigger could really be better, and went from regular to large.

In doing so, it also brings up an interesting situation for potential upgraders who want a bigger screen, but don’t want to pay a “Pro” premium.

The key feature of the iPhone 14 Plus is its size, which starts with a 6.7-inch Super Retina XDR display alongside its 6.1-inch stablemate. This is extremely close to the 6.7-inch and 6.1-inch dynamic of the Pro models, but for standard-edition iPhones.

That larger screen is an OLED display with HDR capabilities, a 2 million to one contrast ratio, 800 nits of brightness, and 1,200 nits of peak brightness under HDR content. Other features like Wide color (P3) support, Haptic Touch, and True Tone make an appearance, but not the always-on screen or Dynamic Island of the Pro models.

The larger screen also translates into a bigger overall size of device, this time 6.33 inches in height, a 3.07-inch width, and a 0.31-inch thickness. It’s also a bit heavier at 7.16 ounces.

These data points are all bigger than the iPhone 14, except for having an equal thickness. It’s comparable to the iPhone 14 Pro Max, though the Plus is a hair wider and over an ounce lighter.

The camera bump is still a significant addition to the back, as it always is. But given the increase in footprint for the iPhone 14 Plus, it doesn’t seem too big for the device.

That glass sandwich of a case around an aluminum chassis continues to be rated to IP68, capable of surviving at a depth of 6 meters (19 feet) for up to 30 minutes.

The other significant change is the battery capacity, as the extra volume means a bigger version can be used. That extra space translates into up to 26 hours of video playback time for locally-stored content, up from the 20 hours of the iPhone 14.

For streaming video, the iPhone 14’s 16 hours becomes 20 hours in the Plus. Audio playback also increases, rising to 100 hours against 80 for the non-Plus and even up from the 95 hours of the similarly-sized iPhone 14 Pro Max.

A bigger battery also means longer charging times, with its 50% charge in 35 minutes of fast charging at 20W being healthy but slightly behind the 30 minutes of the iPhone 14.

In these areas, the extra size provides more display estate and battery power, but at the cost of size and weight.

Something old, something borrowed…

As you would expect for a size variant of the main release, the rest of the specifications list will be a rerun of what’s been discussed before.

Inside is the A15 Bionic, not the A16 that the Pro models were upgraded to. This isn’t the same one as the iPhone 13, but instead reuses the chip found in the iPhone 13 Pro, giving it an extra GPU core to round out the count to five.

With that being a graphical improvement over last year, typical users won’t see much of a difference in performance over the year-ago models unless they go down the route of using benchmark tools.

We did this once already, and we did it again for the iPhone 14 Plus. Unsurprisingly, the benchmark results were about the same.

In Geekbench 5, the iPhone 14 scored a 1,733 and a 4,641 on the single and multi-core tests respectively, and the iPhone 14 Plus was within single-digits of these tests. These are still near identical scores to the iPhone 13 which scored 1,742 and 4,768. While the iPhone 13 scored a bit better on the multi-core, this is all within the margin of error and those CPUs are basically the same.

We see the benefits of that additional GPU core with the Compute graphics test. Our iPhone 14 Plus scored a 12,909 while the iPhone 13 pulled a 10,795.

Antutu put the iPhone 14 and iPhone 14 Plus at right around 803,874 with multiple runs. The biggest year-over-year boost were from the to the GPU and UX results.

Only Apple knows specifically why it effectively used the 2021 flagship processor again in the 2022 lineup. If we had to guess, a year ago when final design decisions were made on the iPhone 14 line, Apple looked at the competition, considered its rivals as being more than a year behind in processing power, and decided to differentiate the line more.

This, combined with an expensive and challenging year for manufacturers, which only now is starting to show signs of recovery, led the company to what we got.

Continuing with the retainer features, Lighting is still the port of choice for the iPhone.

Also, MagSafe turns up for another round, providing Qi wireless charging and a magnetic way to attach accessories.

For the iPhone 14 Plus, Apple didn’t make any big alterations to the camera system it already had in the iPhone 13. You’re not getting the fancy 48-megapixel sensor as seen in the Pro, but instead, the Main (formerly Wide) and Ultra Wide cameras work at 12 megapixels as usual.

What has changed are things like the Main camera’s aperture widening and the use of a larger sensor with bigger 1.9-micron pixels, which provide 49% better low-light performance than the iPhone 13. Night Mode theoretically kicks in less frequently than before, while Portrait mode shots will gain a brighter exposure.

There’s a significant change to the Deep Fusion computational photography smarts of the iPhone 14 Plus, in that Apple now puts it earlier in the pipeline to preserve colors and detail. This is branded under the “Photonic Engine” and could be a big improvement for some users.

There’s also Apple’s new Action Mode, a stabilization system that promises to create gimbal-like shots without needing the accessory. Your mileage may vary depending on how active your lifestyle and videography can be.

The front TrueDepth camera array is still a 12-megapixel snapper but now with a better f/1.9 aperture. It too benefits from the Photonic Engine change and offers the usual array of 4K60 video, Cinematic mode in 4K HDR 30fps, and 120fps Slo-mo.

To go with Portrait Mode, Portrait Lighting, and Face ID’s use of depth mapping, there’s a new autofocus mode for the front camera that can help keep images in focus for multiple subjects at different distances. This can be fantastic for impromptu group selfies.

And again, this is all the same as the iPhone 14.

Emergency SOS via Satellite, as the name suggests, will help users in North America who get into trouble in a no-signal area. By answering questions, the iPhone will beam a message and additional data to a satellite, which will route the call for help to the authorities.

This is a minimal feature, such as being available in North America, so it may have limited use, but it also has its issues. It asks questions to limit the amount of data it needs to send in the message to space, so you can’t use it as a proper satellite phone.

You have to point the iPhone at a satellite in the sky and hope nothing is obscuring your view, like trees.

The other safety feature, Crash Detection, is also self-explanatory. Using onboard sensors, including a high dynamic range gyroscope and a dual-core accelerometer, the iPhone 14 Plus can work out if it has been involved in a car accident, then after a delay, automatically attempt to call for assistance.

This is more likely to be used than Emergency SOS via Satellite and is also a natural extension of things like Fall Detection.

Just, hope never to actually need to use them.

Connectivity, upgraded and not

Aside from the Lightning, as mentioned above, and MagSafe, the connectivity of the iPhone 14 Plus has changed a fair bit.

It’s still able to connect to 5G’s sub-6GHz and mmWave, as well as Gigabit LTE, but these are to be expected. Support for Wi-Fi 6 is also unchanged, as is the inclusion of Ultra Wideband and NFC for Apple Pay and other features.

What is different is the use of Bluetooth 5.3 rather than Bluetooth 5.0. You’re not likely to enjoy the benefits of Bluetooth 5.3 unless you have hardware that uses it, but it’s a nice bit of future-proofing for accessories from Apple’s side.

There’s also a difference in SIM card usage in that you won’t be able to use a physical one in the U.S. Instead, you can have two eSIMs active and store eight eSIMs on the device for later swapping.

This could be a problem for people too used to SIMs or for carriers that have refused to embrace eSIM technology. And, it’s still a problem for some — we’re still hearing reports of rocky eSIM activation across all carriers, with T-Mobile still remaining the worst for reported issues.

Users outside of the U.S. will still be able to use physical and eSIMs for the time being.

An unexpected and serious big-screen option

The iPhone 14 Plus is an unusual smartphone because it rectifies a mistake of Apple’s expectations from consumers. Mini wasn’t the way, apparently, despite a vocal user base. Instead, a larger screen for the standard model was.

This has also introduced an interesting dynamic. If you wanted a big-screen iPhone in 2021, you had to fork out a premium for the iPhone 13 Pro Max. With the iPhone 14 Plus, that same big screen experience can be picked up for $200 less.

Going for the $899 base iPhone 14 Plus is clearly a cheaper alternative to the $1,099 base iPhone 14 Pro Max. You do lose out on things like the fancy 48MP third camera, the always-on display, and other performance boosts. But if you don’t need the extra features, you’re still looking at the $200 saving as a net positive.

There’s not a massive leap from the iPhone 13, aside from the size difference. As such, unless you have to have the larger screen for, perhaps, accessibility concerns, we don’t recommend jumping from an iPhone 13 to non-Pro iPhone 14. As we’ve said before, the iPhone release cycle is best viewed through a 24- or 32-month lens.

But to those upgrading from the iPhone 12 generation or earlier, the iPhone 14 Plus is a viable upgrade if you don’t want all the bells and whistles, but simply want a big iPhone.

Where to buy the iPhone 14 Plus

Apple’s iPhone 14 Plus is already discounted, with wireless providers AT&T and Verizon offering incentives on the latest devices.

Visible is also offering a free $200 prepaid card and free Beats Studio Buds at the time of publication when you sign up for service and purchase an iPhone 14 Plus. See Visible.com for terms and conditions pertaining to the offer.

If you have a used iPhone, you can also check out our Apple trade-in deals for exclusive cash bonuses on pre-owned devices, putting more money in your pocket for the iPhone 14 Plus.