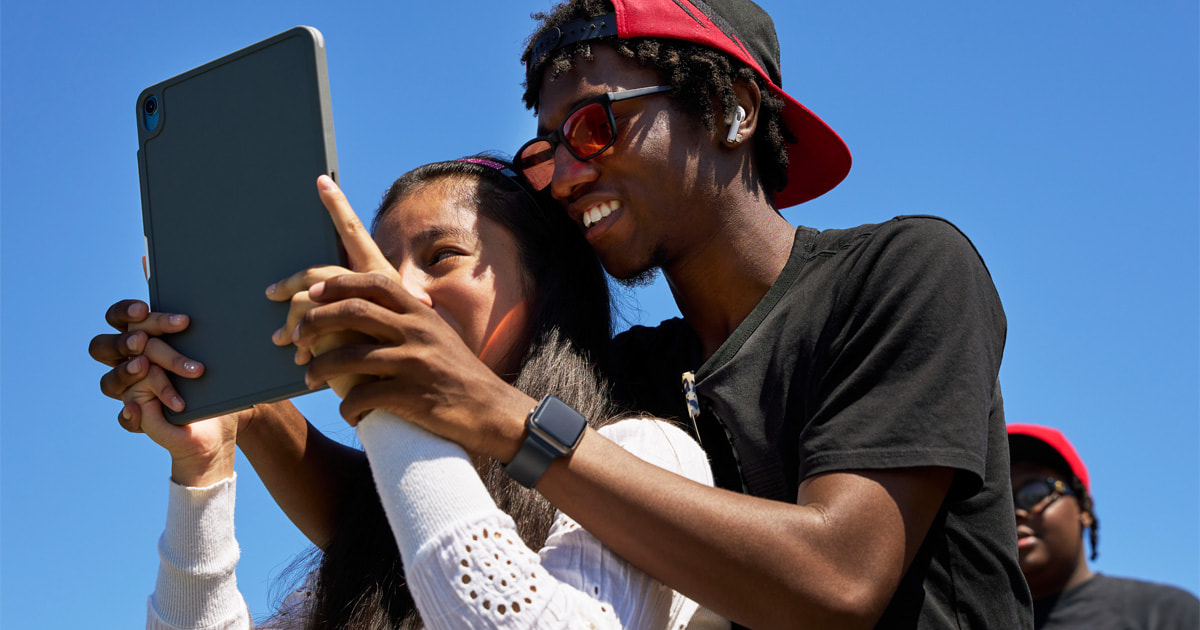 Participants of The Chicago Lighthouse’s Photography for All program gain independence, confidence, and creative skills

Adetokunbo “Toks” Opeifa loves exploring Chicago. She travels the city unconcerned about losing track of a planned route, immersing herself in her environment and capturing photos of her surroundings with her iPhone. “Chicago is a grid system,” she explains. “Even if you get lost, you don’t really get lost, you just walk in the opposite direction and you’ll end up somewhere.”

In the first grade, Opeifa, now 18, was diagnosed with cone-rod dystrophy, a retinal disorder that causes progressive vision loss and light sensitivity. This year, she is participating in Photography for All, a program for youth who have low vision or are legally blind, launched by nonprofit The Chicago Lighthouse in partnership with the city of Chicago’s Department of Family and Support Services (DFSS) and Apple. Over the course of the six-week program, participants have learned technical photography, coding, and career-readiness skills, but most importantly, they’ve gained tools to help them navigate the world around them independently and confidently.

Photography for All is part of the city’s One Summer Chicago youth employment initiative, which provides people ages 14 to 24 with internships and job opportunities at government institutions, community-based organizations, and companies throughout the city. Since 2017, Apple has supported the city’s One Summer Chicago program through its Community Education Initiative, helping create opportunities for youth to develop new skills with Everyone Can Create and Everyone Can Code guides. This summer, more than 200 students experienced opportunities in photography, videography, game design, coding, app development, augmented reality, and more through Apple-supported programs.

The Chicago Lighthouse provided each of the Photography for All participants with an iPad Air, Apple Pencil, and Magic Keyboard to support their creativity. The iPad setup offered an expansive screen with tools to shoot, edit, and share their work. Many participants, including Opeifa, also used their own iPhone to capture photos on the go, seamlessly switching between devices depending on their needs.

Apple experts trained the students on using the camera and photography settings they would need, as well as the accessibility features built into the devices — including VoiceOver, Apple’s built-in screen reader, and Zoom, which magnifies on-screen elements. For those using VoiceOver on iPhone and iPad, Image Descriptions available in the Camera app uses on-device machine learning to help position a subject and describe the objects, setting, and people in the field of view.

While visiting the Adler Planetarium and the surrounding Northerly Island Park for a final day of shooting, Opeifa double-taps her iPhone screen with three fingers in the Camera app to zoom in on the subject of her photo. “Before I discovered Zoom, I’d just hold my phone up all the way to my face,” she says. “This way I can actually see better.”

Opeifa has been using Apple technology since she was in kindergarten when her parents purchased the first-generation iPad to help her read her schoolwork digitally. She laughs at a memory of herself running around her family’s home in Nigeria a few years later with an iPad mini, excited to add to her collection of Apple devices. Having spent much of her life using Apple technology, she is comfortable using her iPhone to get a better view of the world, and she’s also learning how to edit her photographs on iPad. Whether she’s navigating from one corner of the city to the next, or capturing flowers, the city skyline, and any other snapshots of urban life around her that pique her interest, Opeifa is hooked on visual storytelling.

See also  Nest Doorbell Gets a New Wired Version for $179

“I like when pictures tell a story,” Opeifa says. “This program is a nice starting point for writing actual scripts because I’m learning [how] to actually portray visuals.”

Opeifa prefers film and television as a visual medium to bring her stories to life, and she sees photo editing as a way to hone her screenwriting skills. “Screenwriting and editing photos are kind of the same thing — especially working with other people who are blind, you have to be very descriptive,” she explains.

“I never get to see myself represented in television as a Black woman who is also a visually impaired, legally blind individual,” adds Opeifa, who is heading to California this month to attend Chapman University to pursue screenwriting. “Television is a way for people to see themselves in different lights and different identities.”

Opeifa is just one of several Photography for All participants with bold, big ideas for their future. Lance Gladney, who is passionate about pursuing a career in art, hopes to produce his own anime franchise. Gladney joined the program to experiment with a new form of visual art. John Johnson — participating in the program for a second year — is interested in electrical engineering or game design. And Alaula “Aihua” Sprecher is considering colleges where she can study computer science, physics, and astronomy.

Shelle Hamer, The Chicago Lighthouse’s director of youth transition, and Lisa Davis, the former director of One Summer Chicago who brought the idea for Photography for All to The Lighthouse, are excited about the growth every participant experiences.

“Confidence and self-esteem are hard — or I thought would be hard — to zoom in and teach,” says Davis, who also served as director of youth employment at DFSS before she retired. “But this program helped them open up and expose their confidence. It takes away the idea that they can’t do this.”

An artist herself, Hamer has enjoyed a four-decade career equipping individuals with disabilities with tools and education to help them lead more independent lives. When she and Davis launched Photography for All four years ago, she was intrigued by the prospect of how people see differently and express themselves creatively — and saw an opportunity to use Apple technology and Everyone Can Create resources to support that work.

“The tool of photography has a real benefit to people with vision loss,” Hamer says, “from both the artistic side and the functional. All of the kids feel that they have expanded their ability to feel that they can travel anywhere, go to places they’ve never been before. The training they received on the accessibility features available on their iPhone and iPad has given them the confidence to navigate the city and feel independent in traveling around unfamiliar areas on their own.”

And that’s the overarching goal of the program, after all: supporting youth in their quest to be independent and instilling in them the confidence to take their future into their own hands. “It’s just opened the world for them,” Hamer says.