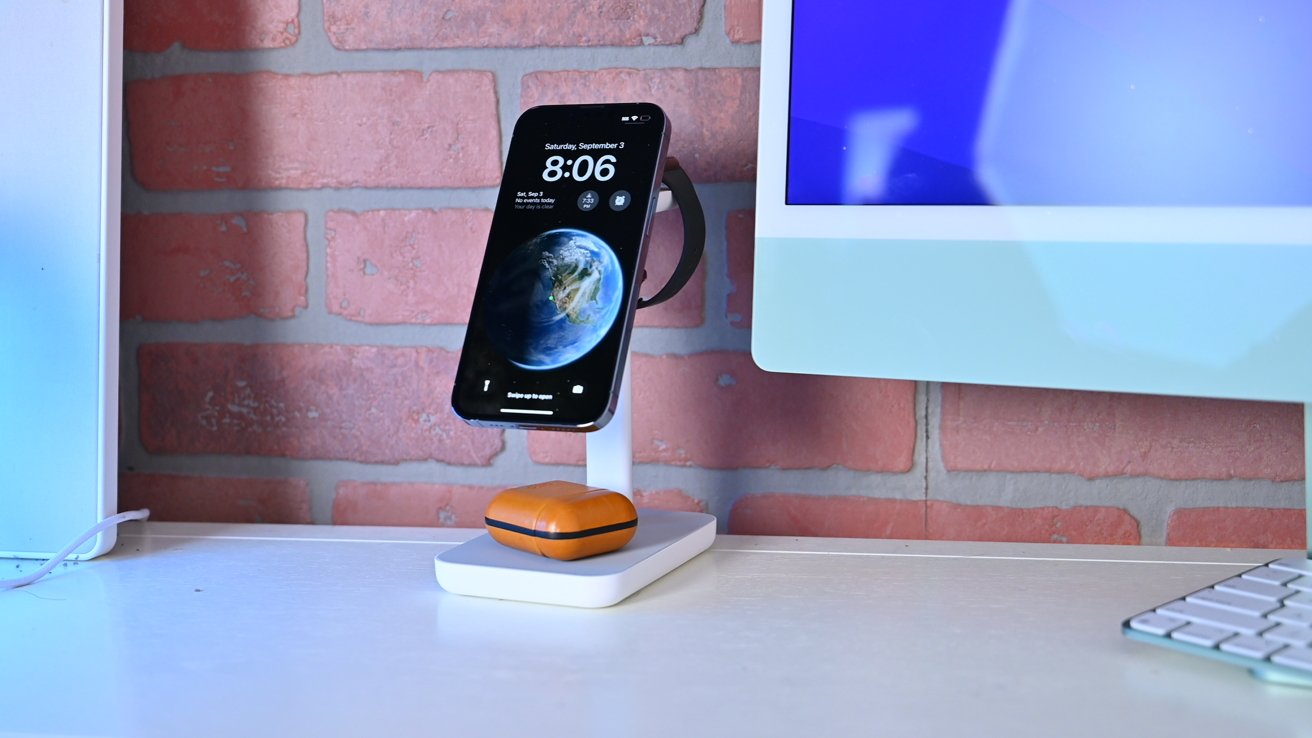 
The Twelve South HiRise 3 is a three-device charger that solves a specific problem with most MagSafe chargers but doesn’t bear Apple’s MFi approval.

When we were first introduced to the third-generation HiRise from Twelve South, we didn’t expect to like it. The HiRise family has proud legacy, and we weren’t sure this latest incarnation would hold up.

Our first reaction from the PR images painted a picture of a plastic charger that lacked any MFi certifications. By all appearances, it didn’t have the Apple backing and premium materials we typically see from Twelve South.

After using the device for a bit, we’ve come around on the HiRise 3. While it isn’t the fastest charger out there, it’s a great desktop or nightstand companion with helpful design choices.

With the HiRise 3 in our hands, we were smitten with its very clean design with purposeful lines. On our white model, it feels like a tray at the Apple Store, with matte-white edges, a soft-touch finish, and a light grey top.

That light grey surface looks unassuming, but it acts as one of the three chargers. It is a charging pad for powering up your AirPods, a second phone, or another Qi-enabled accessory.

A metal pole holds the iPhone and Apple Watch chargers in the air with minimal seams. The whole device looks polished and like something you’d find sitting as at an Apple device demo station.

See also  How Many Streaming Services do You Subscribe to?

One big differentiator between the HiRise and other MagSafe chargers is the charging surface. Twelve South opted for a very large, flat surface to hold your iPhone.

The idea is that as you try to interact with your phone, it is more stable. Think along the lines of a 6am alarm going off and you’re trying to smack that snooze button for a few more minutes of shut-eye.

Most MagSafe chargers have a small contact surface, so when you press on the bottom or edges, it can come free of the magnet. Our nightstand has a glass top, and since we often use our phone with a case, a tumble will wake you up very quickly — trust us.

The flat surface holds the phone well, even with the several cases we tried, and provides additional support no matter where you press on your phone.

On top is the Apple Watch puck which blends neatly into the surface. It has just a small bump and the same matte finish as the rest.

Twelve South says you need a 20W charger to adequately power all three devices on the HiRise 3. You can supply your own, but Twelve South would love it if you considered the PlugBug Slim.

The lower charging pad is capable of 5W of power, whether used with a set of AirPods or another iPhone. The Apple Watch puck can charge at up to 3W, and the iPhone charger is capable of 10W.

See also  I Like These Additions Coming to Google Maps

This feels a bit disingenuous though. We realize Qi chargers come at standard rates, but unlike other Qi chargers that could also charge Android devices, the HiRise 3 is limited just to iPhones. And iPhones can only charge at up to 7.5W via Qi.

By advertising the Qi charger as a 10W charger when it is physically only capable of charging iPhones, unassuming users may be expecting a much faster charger than they’re getting.

It isn’t a 100 percent fabrication, but Twelve South doesn’t acknowledge anywhere on the product page that iPhones are currently limited to 7.5W.

Our biggest gripe with the HiRise 3 is that because it isn’t MFi-certified, it lacks superior charging speeds. It doesn’t support fast charging on the Apple Watch Series 7, and it doesn’t support 15W of charging via MagSafe.

Should you buy the Twelve South HiRise 3?

Neither the Apple Watch nor the iPhone charger are Apple-certified and can’t offer the fastest speeds possible. That doesn’t mean they’re unsafe though.

Qi chargers are still commonplace and perfectly fine to use with your iPhone. Apple enforces rigid standards on MagSafe and Apple Watch chargers, and Twelve South had to skip certification to get the design it was looking for.

Real MagSafe and Apple Watch devices need to use Apple’s supplied pucks and it several limits the design decisions you make. We love the flat, nearly seamless look of the HiRise 3 and it wouldn’t be that way if Apple had its say.

We also appreciate how sturdy the charger is while still supporting the MagSafe magnets on the latest iPhones. As long as you’re ok with the limited charging speeds for your watch and phone, this device will look great in your home or office.

Twelve South did something different, and we applaud it for that. This charger isn’t going to be for everyone, but it is unique, stylish, and effective at charging your daily devices.

Where to buy the Twelve South HiRise 3